First of all, HEY. I know it’s been a while since I posted on my own blog, but I’m hoping to get back into the swing of things for 2017 with my personal writing goals. Part of that is still supporting amazing authors, and I’m so happy to be a part of the blog tour for A CROWN OF WISHES by Roshani Chokshi!

I read THE STAR-TOUCHED QUEEN last year and was blown away with her lyrical writing and unique fantasy world. Needless to say, I’ve been dying to continue the journey!

If you’re interested in learning more about Chokshi’s sophomore novel, I’m going to provide a quick summary here and then directly after that an excerpt of the novel to get you totally hooked!

A CROWN OF WISHES SUMMARY 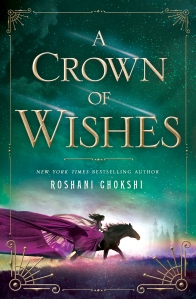 Building on her intricate setting based on ancient India and Greek mythology, her follow-up is a novel spun from enchantment with a strong female heroine and a swoony worthy prince who team up to win back the thrones of their kingdoms.

Gauri, the princess of Bharata, has been taken as a prisoner of war by her kingdom’s enemies. Faced with a future of exile and scorn, Gauri has nothing left to lose. Hope unexpectedly comes in the form of Vikram, the cunning prince of a neighboring land and her sworn enemy kingdom. Unsatisfied with becoming a mere puppet king, Vikram offers Gauri a chance to win back her kingdom in exchange for her battle prowess. Together, they’ll have to set aside their differences and team up to win the Tournament of Wishes – a competition held in a mythical city where the Lord of Wealth promises a wish to the victor.

Reaching the tournament is just the beginning. Once they arrive, danger takes on new shapes: poisonous courtesans and mischievous story birds, a feast of fears and twisted fairy revels. Every which way they turn new trials will test their wit and strength. But what Gauri and Vikram will soon discover is that there’s nothing more dangerous than what they most desire.

A CROWN OF WISHES EXCERPT:

The guards unbound my wrists and shoved me into a red room. I waited for them to go before pulling out a small silk bag of pearl dust I had swiped from the cosmetics table. I repeated the flimsy plan in my head:

Throw the dust in his eyes, gag him, steal his weapons. If the Prince made a sound, I’d hold the dagger to his throat and hold him ransom. If he didn’t make a sound, I’d make him free me for his own life. I knew I couldn’t get far on my own, but most people could be bribed, and if bribery didn’t work, threats always did.

I was glad they hadn’t taken me to a throne room. The last time I was in a throne room, Skanda had ripped away my hopes for the kingdom and destroyed my future.

Arjun did not meet my eyes. And he refused to look up when his new bride and my best friend was hauled into the room. Nalini sank to her knees. Her gaze was frantic: leaping back and forth from me to Arjun and the dead on the ground.

Skanda’s knife was pressed to her throat, sharp and close enough that beads of blood welled onto her skin.

“I know what you want,” said Skanda.

I closed my eyes, shuttering the memory. I looked around the room, wondering which corner was the best position for attacking. At one end, a trellis of roses covered the wall. My chest tightened. I used to grow roses. One trellis for every victory. I had loved watching the blood red petals unfurl around thorns. Looking at them reminded me of my people’s love: red as life. A month before Skanda had me thrown over the Ujijain border, he had set them on fire in a drunken stupor. By the time I got there, it was too late. Every petal had curled and blackened.

“You think these flowers are tokens of Bharata’s love for you,” he had slurred. “I want you to see, little sister. I want you to see just how easy it is for everything you plan and love and tend to go up in flames.”

I’ll never forget what burning roses look like. All those scarlet petals turning incandescent and furious. Like the last flare of the sun before an eclipse swallows it from the sky.

“You think they love you now, but it doesn’t last. You’re the rose. Not them. They are the flames. And you’ll never see how quickly you’ll catch fire until you’re engulfed. One step out of the line I draw, and they will set you on fire.”

I turned my back on the roses.

I chose a corner of the room, and then sank my teeth into the insides of my cheek. It was a habit I’d picked up on the eve of my first battle. Nerves had set my teeth chattering, so I brought out a mirror and glowered at myself. The glowering didn’t help, but I liked the way my face looked. The small movements made my cheekbones look as sharp as scimitars. And when I tightened my lips, I felt dangerous, as if I were hiding knives behind my teeth. Biting my cheeks became a battle tradition. Today I went into battle.

A door in the distance creaked. I ran through what I knew about the Prince of Ujijain. They called him the Fox Prince. And given the way some of the soldiers had jealously said his name, it didn’t seem like a name given because his face had animal features. He spent part of every year at an ashram where all the nobility sent their sons. Reputedly brilliant. Not good. Weak with weapons. Excellent. The guards were fond of retelling the story of his trial with the council. Prince Vikram had to submit to three tasks in order to be named heir of Ujijain—give the dead new life, hold a flame that never burns, and deliver the strongest weapon in the world. For the first task, he whittled a piece of bark into a knife, proving that even discarded things could be given new life in purpose. For the second task, he released a thousand jars of fireflies and held the small insects in his hand, proving that he could hold a flame that never burned. And for the last task, he said that he had poisoned the council. Desperate for the antidote, the council named him heir. The Fox Prince then revealed that he had lied and proved how be- lief itself was the strongest weapon in the world.

I rolled my eyes every time I heard the tale. It sounded like something that villagers with a restless imagination would spin beside a fire. I’d heard another rumor about him. Something about his parentage. That he was an orphan who’d moved the Emperor to pity. But I doubted the vicious Emperor would be moved in such a way. The guards told me that the Emperor kept great beasts at his side that could tear the throat out of anyone who dared to cross him.

Footsteps shuffled down the hall. I clutched the silk bag of pearl dust. The Prince might be clever and eloquent, but you can’t talk your way out of death and I wasn’t going to give him a chance to speak. All my intelligence told me that he was no match for me. I’d have him on his knees and begging for his life in a matter of moments.

A final door opened.  The Fox Prince was here.

Whoa. *blows dust off of this blog space* It’s been a while, hasn’t it? Is this blog even still alive? *checks for pulse* I’ve neglected this space for far too long, and for that, I apologize.

With it being the New Year, I know we are all bright-eyed and whimsical and like to make resolutions that, frankly, we won’t keep. I don’t want to make any extravagant claim here about keeping up with this blog space better. What I will say is that I hope to blog here at least once or twice a month. Starting with this month! And what better way to get excited about blogging again than by posting my most anticipated books coming out in 2015! Yes? Yes! So let’s get started (in no particular order).

END_OF_DOCUMENT_TOKEN_TO_BE_REPLACED

I have the lovely privilege of hosting a stop on the blog tour for my very own CP’s debut release, CATCH ME WHEN I FALL. I’ve followed the progress of this novel from its inception to its final, published form, and it is really something special. The concept behind the story is something I’ve NEVER heard of, which is really rare these days in publishing, especially with Young Adult. Immortal beings called Catchers and Weavers who protect you from Nightmares, which are actual creatures that feed off of your fears while you sleep. Uh, yes please! That is the start of the story but it is so much more than that. A swoony romance, a band of friends fighting evil, and a creepy antagonist that will catch you off guard when revealed — this all awaits you when reading Book 1 in the Dreamcatcher series.

Well, are you ready for my full review? Onward!

END_OF_DOCUMENT_TOKEN_TO_BE_REPLACED

So, my TBR list is already jam-packed full of so many reads I still need to get to that have already been published. But as every avid reader knows, getting excited for shiny new releases is an obsession I will never quite conquer. That being said, I’ve got some top books I’m looking forward to in 2014 that I CANNOT WAIT to get my grubby hands on. Click on the cover to check out the Goodread listing for each book!

You knew this was coming and that it would be at the top of the list, right? If you didn’t then you don’t know me AT ALL. I adore Maggie Stiefvater to pieces and the second book in the Raven Cycle (THE DREAM THIEVES) left me absolutely captivated. (See my review here if you don’t believe me). So it’s no surprise I’m all in for the third book and can’t wait to get my hands on it.

I feel like this series has been a little more under the radar but I’m still in love with it. The world is built around magic being comparable to a person’s life source and if you take it away, you die …or become a Shadow Person which is worse. The first book had a few twists that I didn’t see coming and totally broke my heart!! The second book was more foreseeable but still loved the characters and the journey they found themselves on. Can’t wait for Book #3 to make my collection complete! 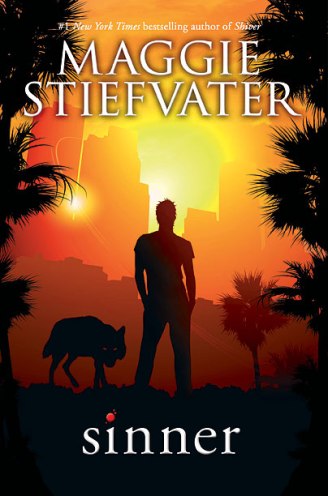 This is probably my MOST anticipated book of 2014. 1) Because, Maggie Stiefvater ..2) Because Cole St.Clair ..3) Because LA!! I’ve made this a no-brainer for you, yes? END_OF_DOCUMENT_TOKEN_TO_BE_REPLACED